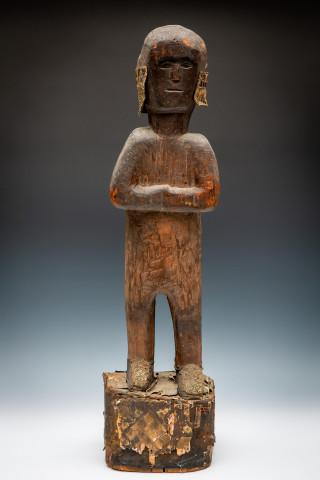 With two late 18th century, Great Lakes, leather decorative bands attached at the sides and back of its head, decorated with braided bird hollow shafts, calamus. The high square base with leather and decorated tree bark. At both sides of the square base a V-shaped cut out cavity. Both feet wearing a leather shoe decorated with bird hollow shaft braiding. The figure pierced with many wooden and some wrought iron pegs, possibly for attachement of a lost garment. With a black, brown patina and remnants of pigments or possible offerings. At the back of the base the remains of a four digit number in white, 22.. Published in 'Bezielend beelden', Prof. dr. Th. P. van Baaren, 1962, page 197. Provenance, ex collection Leendert van Lier. Ex lot 96, Christie's Amsterdam, 16 April 1997, 'Collection Leendert van Lier'. Description in the Christie's catalogue in 1997 was: 'a rare Plain Indian figure.' It is not clear where this 19th century figure originated from, it has Native American Indian decorations, but the figure itself does not seem to have any clear Native American Indian sculptural origin. It remains a 19th century an expressive ritual figure with remnants of usages.